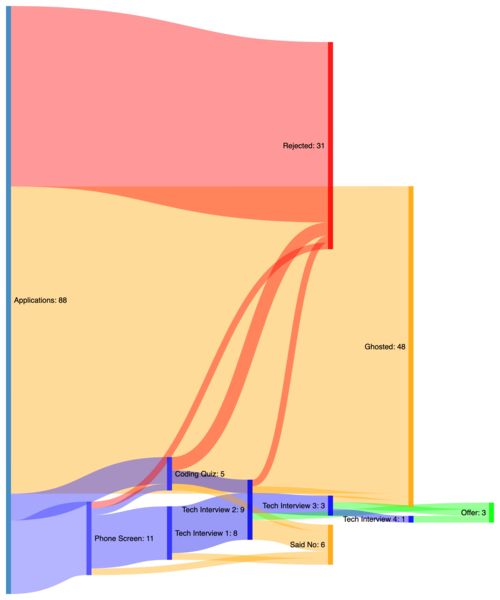 The last few months have included my first foray into job searching post-college. I started looking when I had reached about 2 years of experience at my past role. In the world of software development this typically is the time when it becomes possible to find a job at a higher level (pay + title) than is available to recent college graduates. I took this opportunity to make a parallel move, however, into a different area of software development. My past three roles were as an embedded software engineer working in lower level programming languages on small electronic devices. I spent a lot of time outside of work trying my hand at web development, however, and wanted to make a switch to that field. Web development would give me an opportunity to work in higher level languages with more focus on the business requirements and less on making things work with difficult hardware constraints. In addition, the web development field has a larger set of opportunities for remote work at tech-focused companies. Making a parallel move to a new field meant that I would be staying at the same new-graduate level as I started at 2 years ago, but with an exciting set of new tech to work on.

The vast majority of applications that I put out were towards companies that I found through Hacker News’ monthly Who is Hiring? posts. This job posting thread is an informal grouping of posts from the employees of a wide vareity of tech companies. Some of these companies are early-stage startups that are backed by Y Combinator, the company that runs Hacker News, and some are tech giants like Google and Amazon. Most of my applications went towards companies in the middle of these two groups – companies that would be large enough to afford to train up a new guy like me but not so large that they would be looking primarily for traditional candidates with a CS degree from MIT or anything.

There seemed to be two paths that companies would take in the interview process: some would go through the traditional path of a phone screen and a handful of technical interviews, and others would start with a coding challenge and then follow up with a couple of technical interviews. I found the former path to be the best fit for me and the interviewers that I worked with; I got the opportunity to learn more about the role and the company I had applied to before jumping right into a technical evaluation. Only one of the companies that sent me a coding challenge right off the bat later gave me an opportunity to talk about less technical aspects of the role. The others seemed to view the interview process as a simple evaluation of my technical skills with no consideration for how I would fit into their team.

One thing that surprised me at first about this job search was the quantity of technical interviews that most companies wanted. Applying for jobs in college usually consisted of two or three interviews including the initial phone screen. The interview process this time around usually consisted of a phone screen and then three or four technical interviews. I do have a lot more to talk about interviews now that I have more than a couple of internships on my resume, but it did still feel like an awful lot of repetition of the same technical discussion compared to the streamlined process I found when applying in college.

The process of finding a new role was tumultuous, with tons of technical interviews, a lot of time spent on coding challenges, and a number of frustrating “ghosting”s from recruiters late into the interview process. Looking back on this experience, I think I would have spent less time on coding challenges that came to me as the first response to an application before having a phone screen or anything. The interview process and large number of applications was worth it, though, as I’ve found a great fit for me with a company that I had not heard much of before my search. It’s a bit to early in this new role to say for sure if the switch to web development was the right long-term choice for me, but I can certainly say that my first impressions of the role have been great.