Last year I put together a blog post describing the technology I keep on my desk. I’ve changed some things around since then, so here is this year’s post. 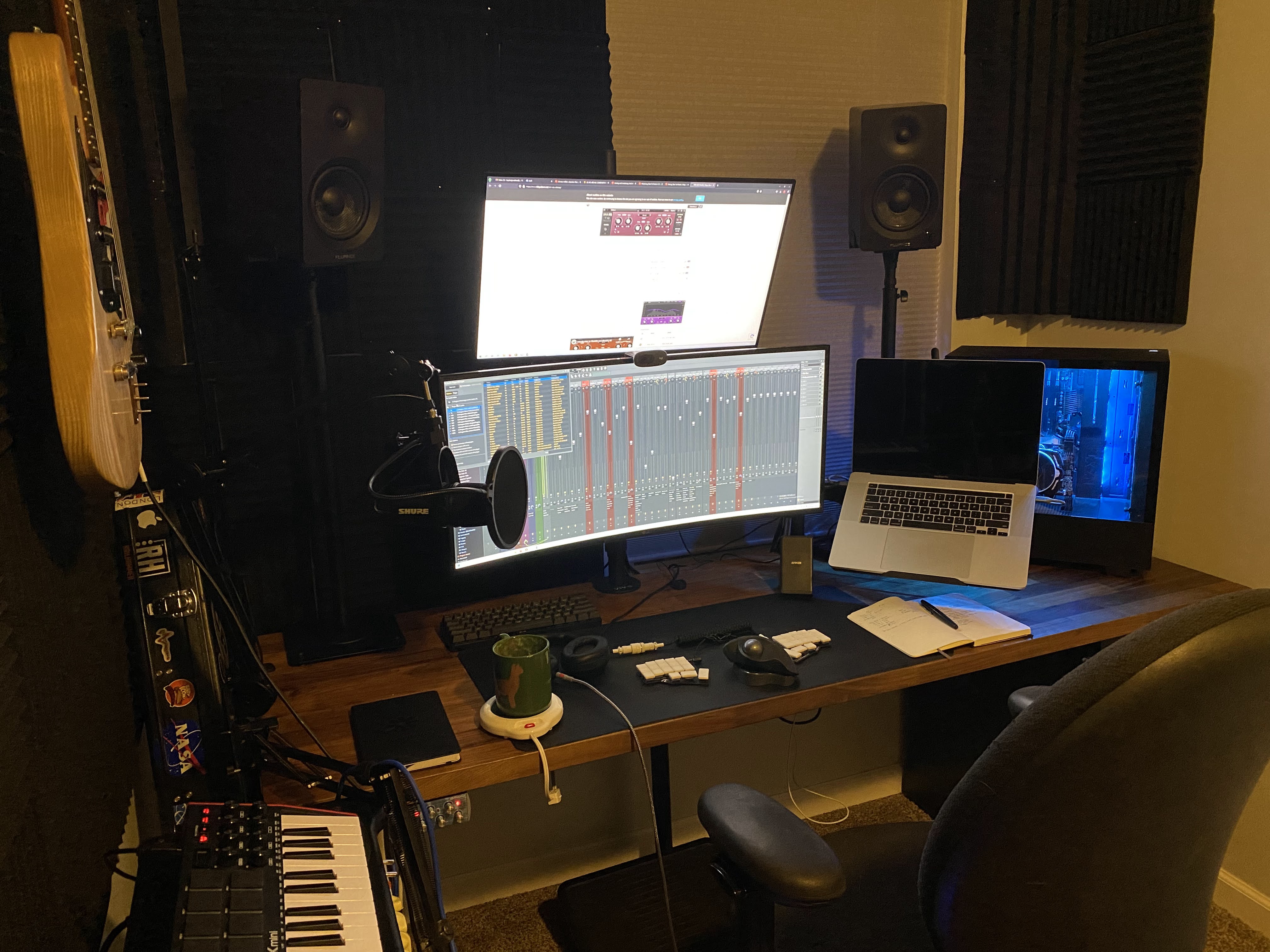 Most of the basics on my desk have stayed the same over the past year. I still have the same two monitors in the same configuration and the same desktop. The speakers are the same, but up in a new home to make room on my desk. I’m also using the same Logitech MX Ergo trackball mouse.

As far as what’s different: There’s a bit of a Theseus’ ship deal going on with the desktop, as I had to replace the motherboard and GPU after they both failed at the same time. The work laptop is different and raised above my desk with a laptop arm, which makes it easy to fit a notebook next to my keyboard. The Macbook and desktop both share the same set of USB peripherals through a USB Switcher. The speakers run through the switcher as well thanks to a USB discrete DAC. You may notice two keyboards sitting on my desk here, neither of which were in the photo from last year. My primary keyboard is the GBoards Gergoplex, which I wrote a review about a bit before the blog post about my desk last year. The second keyboard is a Pok3r that I’ve had for a while. I prefer the Gergoplex for the majority of tasks, but the layers I have set up in QMK make it hard to use WASD for movement in games. The simplicity of the Pok3r makes it a better choice for games.

The biggest change between this year and last year is the addition of a bunch of musical equipment. The majority of this is not new equipment, but I’ve only recently had room next to my desk for it. Having everything right next to my desk has made it easy to record the instruments I play without a lot of setup and tear-down in between.

The microphone on the arm hanging in front of the monitor is a Shure MV7. It’s kinda similar to the famous Shure SM7B, but with a few tweaks that make it better suited as a mic for speech. I use it for work calls primarily, but it’s also a pretty good mic for vocals. This, and the other microphones I use, run into my desktop through a Presonus audio interface mounted below the left side of the desk. 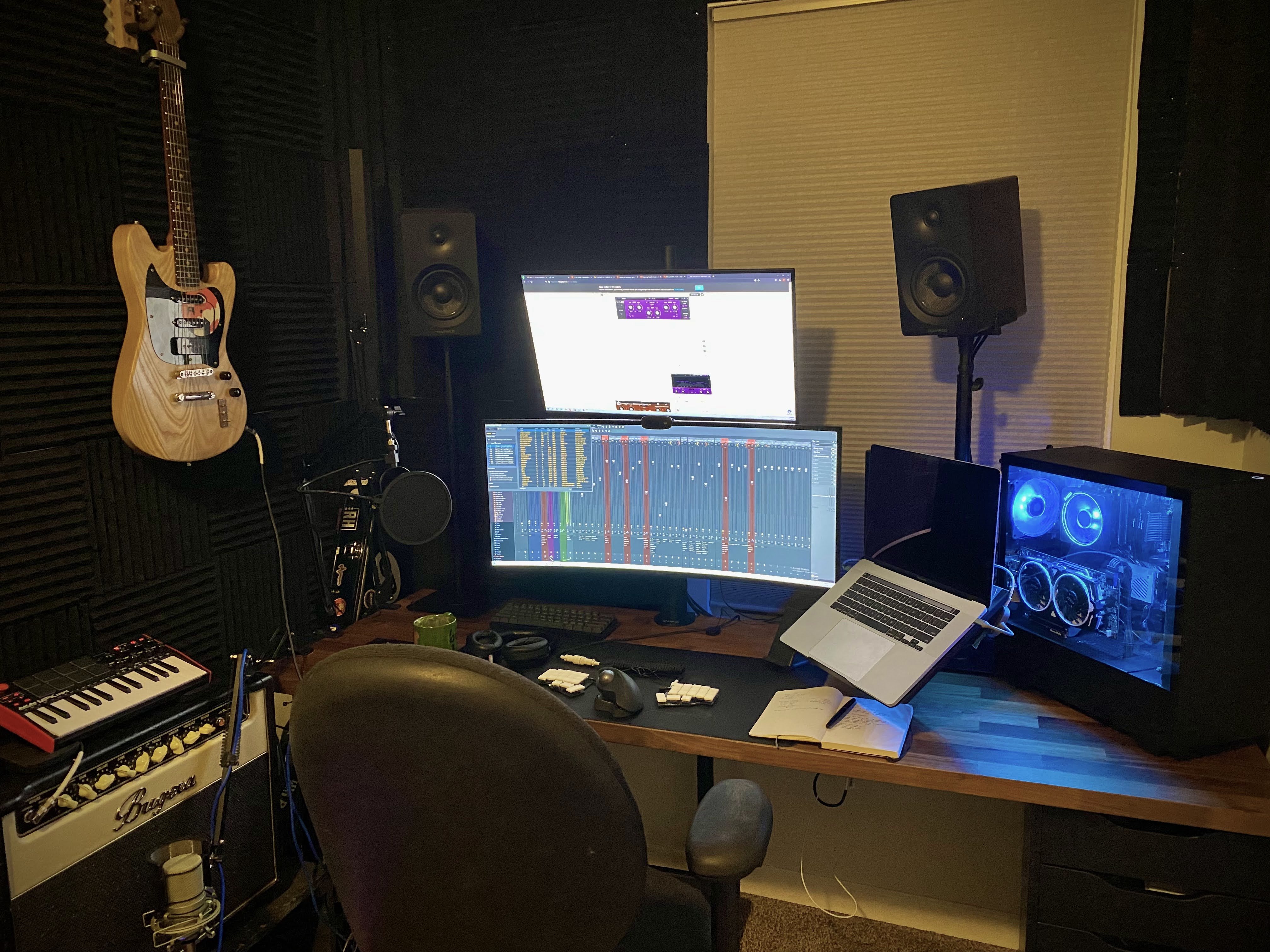 The second boom arm is holding an MXL 990 microphone for recording my guitar amp. The microphone also works pretty well for vocals, so having it on a boom arm in that placement makes it easy to switch between recording guitar and vocals. The guitar hanging on the wall is a custom design built from wood from my grandpa’s farm by my college roommate and I. It runs through a pedalboard on the floor and then into a Bugera V22 amp above it. The amp is sitting on a little plywood stand that I put together that allows the pedalboard to fit underneath it.

On top of the amp sits a pretty recent addition to the desk, an Akai MPK Mini. I find it much easier to program drums and synths with the MIDI keyboard compared to using my mouse and dragging and dropping notes.

This is a pretty minor thing, but I picked up a 50 foot long aux cord to connect my headphones to my audio interface and it’s been well worth the cost. It’s only like ten bucks for a cable that long and it makes it so I no longer get the cable snagged when trying to reach for a guitar or move my chair away from the desk.

This article mainly focuses on the changes to my desk setup over the last year. For more details on the hardware that’s stayed the same, check out last year’s post.